FROM NEEDLEWORK CLASS TO PUNK MUSIC

Introducing Deap Vally from California, a 2-piece female punk band on guitars and drums that have been compared with the likes of White Stripes and Led Zeppelin.

Carving out a niche on the music scene
We talked to Jule Edwards from Deap Vally while she’s sitting in a hotel room in Hamburg, which looks out over a horse racing track – although there’s no race today, she comments.

She doesn’t hide the fact that the band had the question before. Still, why “Deap Vally” – and why is their upcoming debut album entitled “Sistrionix”?

- Yes! We've had this question a million times before. Deap Vally refers to where I grew up – and the dialect Lindsey and I both speak in.

- SISTRIONIX is a conjunction of two words: 'Sister' and 'Histrionics' spelled with an X to keep it fresh, Julie Edwards, drummer and singer of Deap Vally, explains.

Where do you see your place on the music scene – and why do you only perform with vocals, guitars, and drums?
- Well, as far as I know, we are the only hard-rocking female two piece band, so we're carving out our own niche on the music scene – and hopefully inspiring lots of women to do the same. The equation of guitars, vocals, and drums seemed to work, so we just went with it.

Where’s the bass?
From an audiophile and frequency oriented perspective, it’s interesting how they manage to keep the pieces of their soundscape together. This is only guitar, voices, and drums, so apart from the lowest guitar notes and drum effects, there’s actually nothing here that comes even close to bass frequencies.

Yet, the band’s energy, devil-may-care attitude, lyrics, and strong riff-based melodies strangely seem to do the job. And they definitely do care about good sound:

- I'm not a stickler about good sound when I'm listening to music. I listen a lot on my laptop, which doesn't sound great, but still gets the vibe going. I have a crappy record player at home that sounds pretty terrible – in a great way.

Someday when I have more cash to spend, I'd love to get a sweet, warm vintage soundsystem going in my house, the band tells us.

Creating new music
Believe or not, Deap Vally's two members originally met at a needlework class - and now plays punk music together. The band's singer and bare-footed guitarist, Lindsey Troy, grew up playing music with her sister and her family.

While Julie Edwards herself has a background in dancing, singing, and acting and has another two-piece band called The Pity Party parallel with Deap Vally.

So when the two girls are Deap Vally, how do the create a new piece of music?

- We create new songs all different ways. It’s always a different process. We’re not locked into systems, but rather feed on inspiration and ideas that slip out of the ether and into our set, Julie Edwards explains.

She doesn’t hesitate when asked what inspires them – in life and in music:

- The desire to be great, to shatter convention, to inspire others, to be strong, she concludes.

Debut album and upcoming tour
Deap Vally seems to know what they’re doing and people love the music for its honesty and energy.

Their debut album is out first week of July 2013 and they’ll be playing festivals all summer and then headlining some tours in the Fall. Welcome a pleasant, unorthodox musical surprise.

See more about Deap Vally and watch videos on www.deapvally.com. 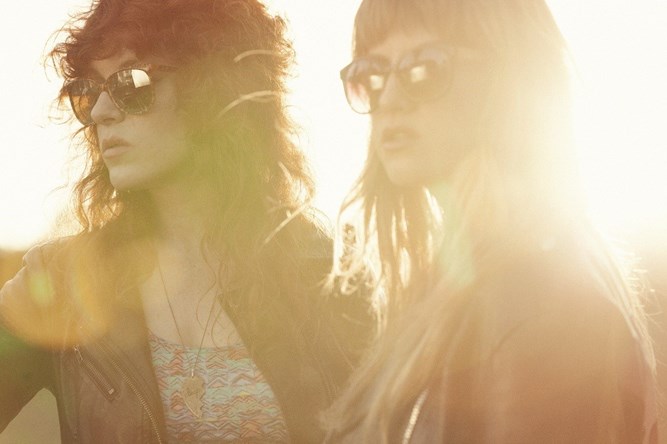