THE HANDMADE SOUND OF TODAY

Album recorded live in the studio
The recording of the album is also highly influenced by this “live”-approach:

- During the recordings in the studio, my band and I have all played at once, live so to speak. That was a good decision! And we went into the studio without any preparations or rehearsals.

- The entire album is created out of the moment. We all respected and paid attention to each other, and the authentic atmosphere is felt, when you listen to the album, ELEN explains.

At first, she expected to go into the studio, let the musicians get to know and understand each other, to learn how everyone were ticking musically and then start working. But it proved not necessary:

- In stead, I determined an approximate direction in which we all went together. It was probably just right that we hadn’t worked together before. Because of that, each musician developed this sensitivity towards the other musicians and the respective song.

- It was a great experience! My own favourite songs from the album are “Nobody Else” and “Compassion”, ELEN tells us.

ELEN did not herself write the single “Nobody Else” (by Kat Frankie), which is streamed here. But ELEN finds it to be an incredibly powerful track and it was a natural choice as her first single.

She believes it represents the album very well and is excited to hear people’s reactions, people who are more used to listen to her well-known cover songs from our common heroes.

Independence via crowdfunding
The album was financed through crowdfunding, which means that anyone can support an artist financially and otherwise with small or larger contributions. Why did ELEN choose to do this?

- I decided to do crowdfunding because I wanted to produce the album independently. A music production like this one costs a lot of money. So how to finance such a project and still remain independent? ELEN asked herself.

- This financing method is becoming more and more popular these years. And I am very happy about it! You don’t have to do what others want, just focus on your music.

- It was hard work, my fiancé and I have printed flyers and I made street music every day, I appeared on the radio to advertise my crowdfunding project etc. In addition, it’s been a good test to see if all the hard work paid off. As it turned out, everything went very well. And now my debut album is complete.

In this way, ELEN’s background as a street musicians still influences her career to this day:

- I think there is an art form called street music. Now and then, I like to listen to electronic music. But I guess that “we” – street musicians – are especially fond of the handmade style and characteristics.

- And I think that my preference for this particular type of music made me do street music. So, the music influenced me – and not the other way around, ELEN says.

Not German, American!
Her music doesn’t sound particularly German, but rather American inspired:

- It’s always been the American sound that tickled in my ears. The music doesn’t sound as clear and has a strange depth, whereas the German sound is very differentiated with lots of treble. You hear all instruments clearly though, but I actually do not like it.

In stead, she’s listened to artists such a Feist, Bon Iver, The Doors, Daughter, Florence + the Machine – and not least Coldplay’s early albums. There are more, but these are the most important as influences to her understanding of music.

Surprisingly, she doesn’t seem to have personal favourite songs, she would like to have written herself:

- Actually none. What other people did or do, I like to listen to it as it is. Wheras your own music always can be improved somehow. You hear yourself singing and think you could have sung better.

- Therefore, I probably feel uncertain about my all-time favourite tracks – asking myself if it’s okay or if I could have done something better. So I just sit back and enjoy songs from other artists, ELEN tells us.

Good sound is essential
During the album production, ELEN and her team focused on and took great care of the sound aspect. They let several studios mix until they found the perfect one.

- And because sound is so important, I mostly listen to music on vinyl from a high-tech audio system. It’s so important to place good speakers right in the room. Even the greatest amplifier cannot unfold with bad speakers. Further, the character of the sound is indeed affected, so we looked for quite a while and experimented to find a music system. Until we found our baby, she says.

Be your own boss
She believes, that today’s music scene is developing positively. There are a wide variety of styles and lots of possibilities. There’s broad interest and many musicians are making music independently. And today’s digital world means that everyone can publish and show the world their music. You can be your own boss, as she puts it.

ELEN has completed her debut album and doesn’t plan anything specific for the future:

- Releasing the album all by myself was not easy. So maybe I need a little break after this. I really need variation after such a long period with one thing. But a new album will come – and concerts, she says.

It makes perfect sense a young talented artist such as ELEN promising this. As we speak, she’s sitting in the passenger seat of a car, while her fiancé Andreas is driving them to Scönhauser Allee in Berlin to make some street music. Or as she puts it:

- After all, that is why you become a musician: To make music! 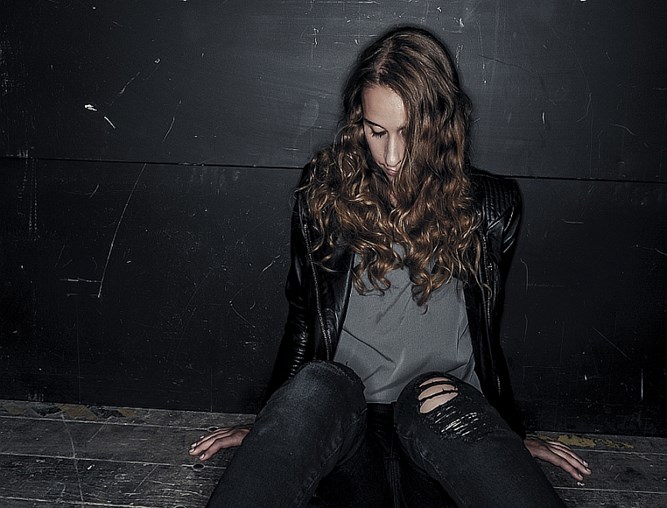