OBERON 7: ONE OF THE BEST-SOUNDING SPEAKERS IN ITS CLASS

OBERON 7 sweeps the reviewer from Tweak.dk of his feet in a recent test.

The Danish hi-fi site, Tweak.dk has had the possibility to test the largest speaker of the DALI OBERON series, which the reviewer finds really impressive. As he says: “I will try to be objective in my assessment, even though it can be difficult when the speakers impress in the degree that the OBERON 7 does.”

The OBERON 7 is one of the best-sounding speakers the reviewer has heard in its price class for both movies and music, and he describes it as returning to the early hi-fi days. It “plays as a real hi-fi speaker without being flat and boring,” he explains, and he continues: “This means that these speakers deliver a sound unlike anything else I have heard from DALI.” He thinks that the DALI DNA is visible “but OBERON 7 has its own awesome sound image, which has to be experienced.”

One of the things that impresses is how much bass the OBERON 7 delivers. Actually, the reviewer’s 12 inch subwoofer was never really in action and he did not feel the need to connect it. “The sound remained detailed and extremely pleasant to listen to even at very high sound levels and with bass-heavy music,” he says.

No matter what type of music the reviewer played on the floorstanders, he experienced a melodious sound and real hi-fi qualities. He was swept off his feet because as he explains, they have “a strong bass with a lot of punch and excess, a midrange that was obvious at high sound levels when the drums was beating in a great rock track. Last but not least, the treble delivered a really high degree of detail, which gathered the total sound image really well.”

The verdict is that “OBERON 7 is worth every penny.” According to the reviewer OBERON 7 is a “thoroughbred hi-fi loudspeaker, which sounds good with every kind of music.” And he finds that it delivers a sound that matches speakers that are much bigger and more expensive.

“Job well done DALI,” Tweak.dk concludes. “OBERON 7 is a really solid and good sounding floorstanding loudspeaker, which does not even blow the budget.” 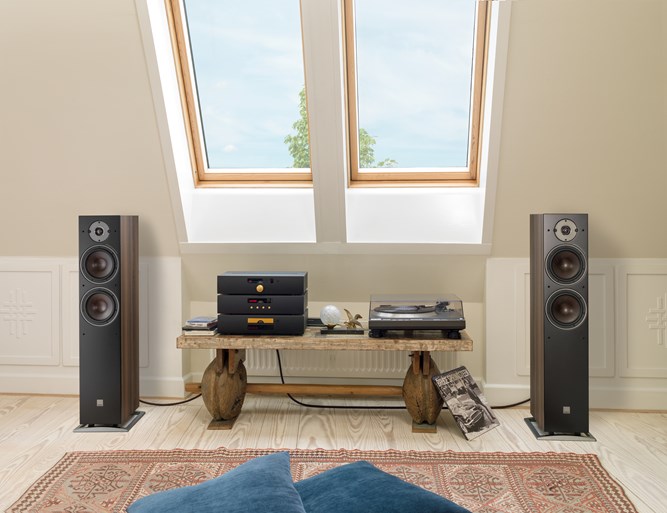