'Drum Impro' is an improvisation between Marilyn Mazur and fellow drummer Audan Kleive, which is not available on any other release.

Marilyn Mazur was born in New York in 1955 but has lived in Denmark since she was six years old. As a child and teenager she played classical piano and danced ballet. Although Marilyn received a formal education in music, she is largely autodidact on her instruments.
She started her musical career as a dancer in 1971. As a composer/pianist she formed her first band Zirenes in 1973. And since 1975 she has performed as a percussionist, drummer and singer with various groups and became known in the Danish music scene as the colorful percussionist/composer of the group Six Winds with drummer Alex Riel as well as the leader of the all-women musical theater group Primi Band.

In the beginning of 1985 she participated in the recording of Palle Mikkelborg's 'Aura' with Miles Davis. Miles Davis was so intrigued with Marilyn's talent that he hired her for his band. She toured with Miles Davis for long periods as well as with the Gil Evans Orchestra.

She also did a world tour in 1987 with the Wayne Shorter Quintet and was back with Miles Davis in 1988. In 1989 Marilyn Mazur decided to leave the Miles Davis band in order to concentrate on creating concepts, music and "her own" seven-piece band Future Song, which is still one of her main groups. In 1991 she joined the Jan Garbarak Group with whom she toured until 2005.
As a composer Marilyn has a lifetime grant form the Danish National Art Foundation. She has also received prizes and grants from various other organizations.

This track is not available on any other release. Marilyn Mazur gave DALI special permission to use the track on this CD.
The recording was made during a concert Marilyn gave with Future Song in Norway and it is actually an improvisation between Marilyn and fellow drummer Audan Kleive. Sound engineer Sven Persson recorded it straight from the mixer used to feed the front-of-house amplification system. Although it is not the traditional method for a high-end recording this track captures the improvisation remarkably well.

We basically begged Marilyn for this track as it is unquestionably one of the best percussion tracks we have encountered. The track is a pleasure to listen to and test a speaker with. Played on the right system this track is like no other percussion or drum solo we have heard... ever. 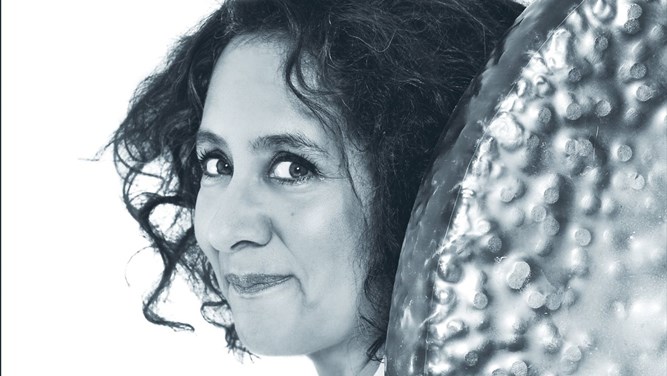