We asked him how and why African music influences his expression?

- I do a lot of travelling and meet many people along the way. I met a Zimbabwean who told me stories about his life in Africa and I was intrigued. But I was still surprised at the emotion that stirred in me when, from my standpoint in Tarifa on the southern tip of Spain, I first laid eyes on the distant shores of Africa. Having already embraced other genres of music (Spanish , jazz, Brazilian, Italian folk music, etc) I was intrigued by the rhythm of African music from the first time I heard it. I wanted to deepen my understanding of it – which led me to write music that reflected this – and culminated in the album “Sketches of Africa”.

So how would you - very generally speaking, off course - describe main differences between Western and African music?

- I believe, generally speaking, African rhythm is interpreted and danced in a different way, Antonio Forcione explains.
- Western Music is, broadly speaking, expressed with emphasis on the downbeat, whereas African music seems to emphasise the rhythm on the upbeat. Sometimes, to the untrained ear, African music appears deceptively easy to reproduce, but once you try it, there seem to be layers beneath layers of rhythm. I believe that there is a lot of resonance of African music in Western music, but it only just skims the surface of the deep mystery evoked by African music.

African vs. Western music
How did Africa affect you compared to your own background in Western culture?

- As you can see, I was and still am profoundly moved by the music and the people of this amazing Continent.
I always felt very welcome wherever I travelled in Africa, and was moved by the generosity of people who had next to nothing, but still found ways to be excited and happy about life despite their hardship. It puts one’s own situation in perspective and makes you re-think your approach to life.

How do you see your own musical development from your latest record up until the new “Sketches of Africa”?

- Already on my previous studio album, “Tears of Joy”, my face was turned towards Africa. As evidenced by Sahara Rain, and even before that, African Dawn on my “Live!” album. But I wanted to deepen my experience of this music by absorbing from and working with African musicians. I wanted to get closer to the core of the influences that shaped African music, in its myriad forms, creating a kaleidoscope of sounds, songs and rhythm.

Detailed and intimate sound
The sound on a new track like “Madibas” is rather spacious, detailed, and yet intimate. Are you consciously going for communicating such elements during the recording process?

- I am pleased that you picked up on what was intended by that particular piece. The idea originally evolved from my wanting to create something as a tribute to Nelson Mandela. And in doing so, I wanted to incorporate into the texture of the music the elements which, in my opinion, would be appropriate to the human aspect of this great man. He is mostly associated with dignity, wisdom, and grace, but through this piece, I wanted to capture his humour and smile in the groove as the positivity he inspired in me.

Talking of inspiration: Which music do you find inspiring on the scene today – regardless genres and geography?

- To me, at this stage in my life, inspiration from music has no boundaries or geographical frontiers. My compass is the depth to which a particular piece moves me and stirs my spirit. I am particular intrigued by music that is still strongly linked to its roots where you can follow the thread to its real origins. In my writing music, I endeavour to trace the roots and give it wings.

Sound reproduction
What is your relation to good sound in general and good loudspeakers in specific?

- There’s a long process from the first creation of a sound, the striking of the note on the instrument, to the ultimate delivery to the listener in their living room. So the quality of the loudspeaker is the last vital link in the chain of sound, and critical to the listening experience.

What is most important to you in sound and loudspeaker sound reproduction?

How would you yourself describe the core elements/priorities of your talent and ways of interpreting?

- Creativity, versatility, curiosity, and a restless soul. My priority to discover, innovate, and always learn new ways of doing things. I love to absorb things around me and translate them into my own experience, Antonio Forcione says.

Sketches of Africa - and new projects coming up
We're approaching the end of the interview, so I ask him what's up next - what are his future plans?

- At the moment, I am still pretty steeped in the process of introducing Sketches of Africa to the world. But I have been contacted with a view to embarking on some new band very exciting projects. Right now, apart from a few gigs in Europe in the near future, I am investing my time and energy in preparing for the Edinburgh Festival and the launch of my new album “Sketches of Africa” which I am very excited about and can't wait to get on that stage. Its been a long time coming and I am enjoying every step of the way. Come and join me on this journey, Antonio Forcione concludes.

Find out more about Antonio Forcione and his music: www.antonioforcione.com. 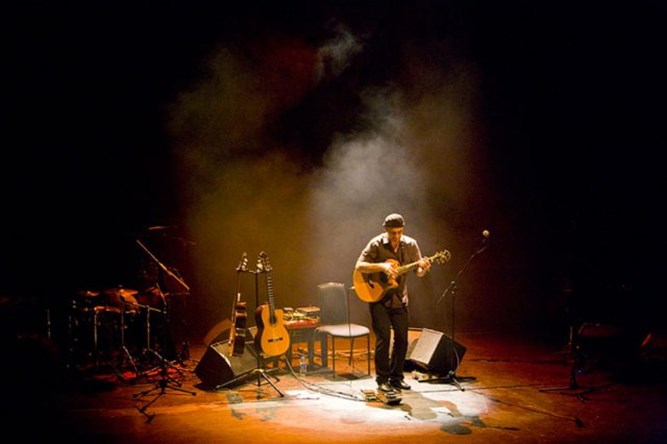