Some of the latest loudspeakers from DALI benefit from our patented Soft Magnetic Compound (SMC) in the pole piece of the woofer magnet motor system. The result is an extremely agile, well-behaving, ultra low-loss woofer with a significant reduction of distortion from mechanical loss.

The purpose of SMC is to reduce sound coloration to a level where the music comes alive inside your livingroom - as if the artist was present. The ultimate goal is to make the sound reproduction so free of distortion that you are not able to tell the difference between a live or taped performance.

The drivers in a DALI loudspeaker are developed in-house. And for years, designing magnet systems has been a DALI specialty. So it was natural for us to challenge the highest market standards and to take the magnet system design further than ever before with the launch of the EPICON series.

The goal was to reduce coloration of the reproduced sound. The result was the Advanced Soft Magnetic Compound magnet, also known as SMC – a coated magnet granule that can be shaped into any form needed. SMC is a material with many advantages. It eliminates the modulations of the flux in the magnet gap when current, which is running through the voice coil windings, generates new “competing” flux in the magnet gap.

Furthermore, it eliminates the frequency dependency of the electrical and magnetic properties of irons parts. Actually, SMC offers exactly the right physical properties; very high magnetic conductivity and very low electrical conductivity (approximately 1/10,000’s iron), which gives a dramatic reduction in the unwanted distortion caused by mechanical loss in the magnet system – a reduction dramatic enough that it is clearly measurable and indeed audible.

By introducing SMC into the area close to the magnet gap, this modulation is significantly less influenced by the current in the voice coil. As a result we are able to reduce the distortion from current generated flux variations greatly.

Eddy currents are an issue that occurs in most speaker designs. The movement of the voice coil creates small localized magnetic fields alongside the pole piece. And the nature of these local magnetic fields is that they apply an opposite directed force onto the moving voice coil.

Eddy current is for example used in induction hot plates as it is a very quick and energy efficient way to generate heat. In trains and busses they are very effective breaks. Breaking as well as heat are elements, which are not welcome in a speaker magnet motor system. They both cause distortion in the audio signal that is being reproduced, which of course is unwanted in a speaker magnet motor system.

By using SMC for the pole piece, eddy currents are greatly minimized and removed a very important distortion factor in the magnet motor system. What happens is that the non-electrical conductivity of the Soft Magnetic Compound ensures that only a few local eddy currents build on the surface of the pole piece. This minimizes the heat and resistance in the woofers, which is normally caused by these fields.

In the OPTICON series, the entire pole piece, which is surrounded by a large ferrite magnet, is constructed by the Soft Magnetic Compound. That way the SMC material is used in the most important parts of the driver.

The RUBICON speakers, on the other hand, have a pole piece, which is constructed entirely from SMC, and which is surrounded by a copper cap and enclosed within a large ferrite magnet. This maximizes the effect of the SMC, while keeping the design of the magnet motor system fairly simple.

In the loudspeakers of the EPICON series, the Soft Magnetic Compound is used in the pole piece as well as in the ring around the crown/cylinder head – actually it is incorporated in all the parts where it will have an effect. 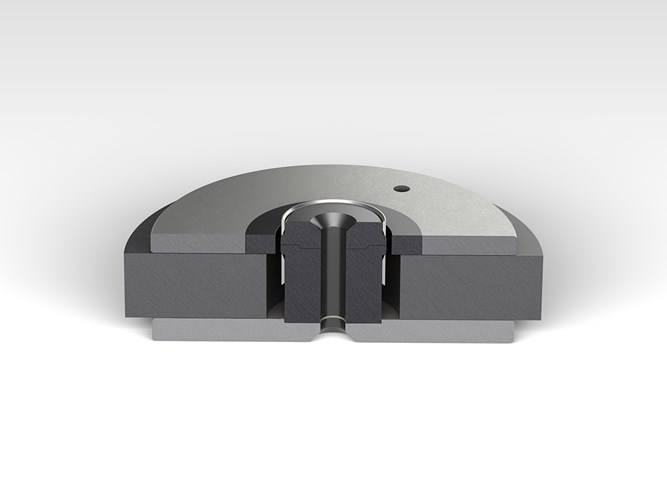